This is a post where I probably get a whole lot of nautical terminology wrong, but this week I’ve been working on a couple of conversions for Black Seas.

The first is a Gunboat Squadron. 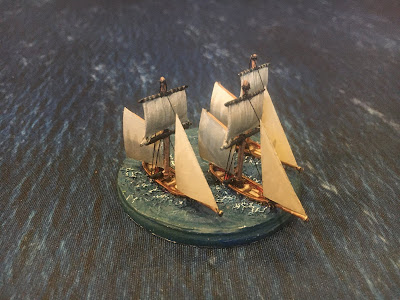 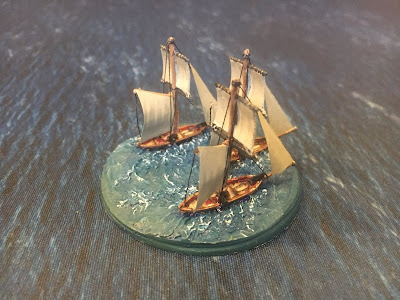 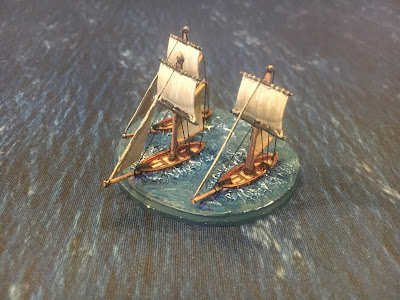 I decided that the boats in the stock kit looks a little too much like a trireme for my liking, so set about modifying them.
I added bowsprits made from brass rod, removed the original mainsails and replaced them with gaff-rigged ones.
The resin Warlord has used is quite ductile, so it drilled easily without fracturing. You may not see them in the photos, but there are 1mm holes drilled for rigging just above the waterline, on a line right between the two cannons. Apart from the metal topsail, the other sails were made from paper, based off the ones in the brig kit.

The second conversion was a 12-gun Sloop made from the 18-gun Brig kit. 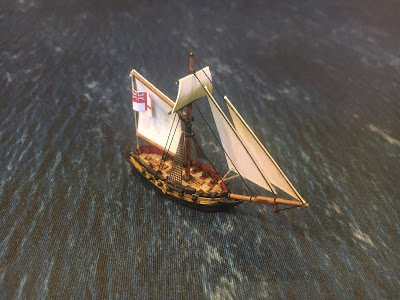 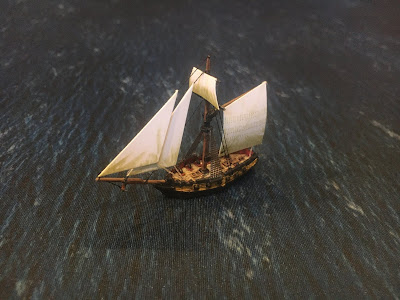 I sliced out the four middle guns with a razor saw, and joined the resulting halves together, while also removing the rear-most pair of guns and placing the mast slightly aft of where the main mast was on the brig. From the mast I removed the lower two yards. The result is a little bit fat, probably by about 2mm, but the surgery that would be required to remove that extra width from the kit doesn't bear thinking about.
I’ve used the headsails and spanker from the Third Rate kit while keeping the Brig kit’s topgallant. With the spanker boons from the Brig being too small for the 3rd Rate sail, I could have used the ones from the Third Rate, but wasn’t prepared to cannibalise the kit to that extent, so the brass rod came out again to make new ones.
Both the Gunboats and the Sloop should see action in the Smuggler’s Run campaign, hopefully kicking off in March.
Posted by Richard at 8:59 pm