A couple of years ago I wrote a post looking at the cost-effectiveness of the various Soviet anti-aircraft options in Team Yankee. The new WW3: Soviet book has introduced the 2S6 Tunguska to the game, so this is a good opportunity to update that earlier analysis. In the game, the Tunguska differs from the other Soviet systems by having two anti-aircraft weapons, cannons and guided missiles. Its guns are better than the Shilka's, with greater Range, ROF, and AT, making it the best AA weapon available to the Soviets. Despite only being able to use one of its weapons per turn, it carries a hefty price penalty for having both, costing twice as much as a Shilka. Yes, it's expensive, but it's guaranteed to always be able to shoot at something, whereas the Shilka is limited by range.
Note: There's an interpretation of FM-101 that says that if you fire one of these weapons in the enemy turn, you cannot fire the other weapon in your own turn. I don't agree with this reading, so have written this post assuming that my interpretation is correct, and will update the numbers if FM-101 gets clarified to say that I'm wrong.

I updated my AA spreadsheet to include the Tunguska stats, and reran the cost-effectiveness calculation: which unit will do the most damage to a flight of typical NATO jets per point expended (click on the chart to get a higher resolution version). 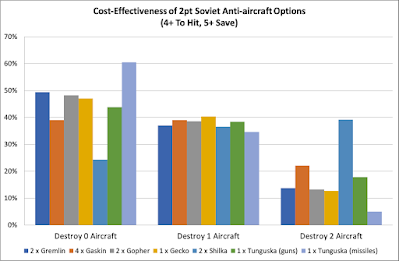 The Tunguska's guns come in as the third most cost-effective form of air defence, but suffer from occupying the same unit slot as the Shilka. If you are looking for long range air defence, the Tunguska's missiles on the other hand are terrible value for money - costing as much as a Gecko while losing a point of ROF.

This ability to fire both weapons at helicopters in sequential turns raises the question of which weapon should you fire in the enemy turn, and which in your own. The specific scenario I have looked at here is a pair of Tunguskas shooting at a pair of hunter killer helicopters (making the heroic assumption they are in range of both weapons), and compared it to an equivalent cost unit of Shilkas. In the turn which the helicopters fire, you shoot against a Concealed and Gone to Ground target, while in your turn they are only Concealed. Assuming the helicopters are in range of both weapons, is it better to fire the guns needing 6s and the missiles needing 5s, or vice versa? 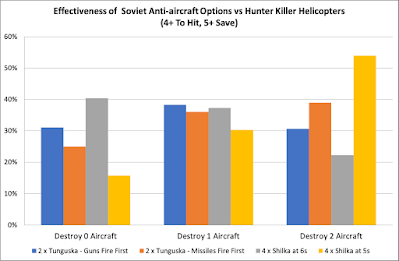 Overall it's better to fire the missiles at the Gone to Ground target, because the guns are just so much better at killing stuff that it's best for them to be hitting on 5s rather than 6s. So the question then becomes: can you afford to lose the teams that the helicopters are targeting? If yes, fire missiles then guns in order to have a higher chance of killing something across the two turns. If not, either fire the guns first to try and kill them before they get you, or better yet just spend the points on Shilkas.

The final question I wanted to answer was how many points should I be spending on AA in my Soviet lists? Or more specifically, how much air defence do you need to be able to defend against four A10s? 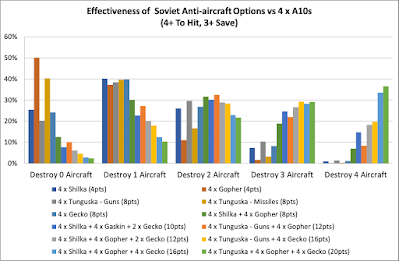 Having braved your layered air defence, how many of your teams will the surviving A10s kill in return? For consistency, the target in the model is one of the armoured platoons, with the massive blue spike in the following chart at "Destroy 4 Teams" being when the unarmoured Gecko is the only target. Of course, that may not be the way things play out in the game, with the US player just as likely to take a run at the Geckos as the softest target whenever they're present, or split their fire to try and chip teams off multiple platoons. 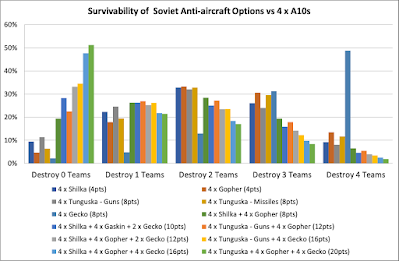 There are a few conclusions coming out of this.
Posted by Richard at 7:01 pm