On Saturday I was at the club for the first time this year, having arranged with Chris to give Team Yankee a go. Having agreed on 55pt lists, I turned up with 11 T-72s and two Hinds, while Chris had six M1A1s and two Cobras, very nicely painted for Desert Storm.

We rolled for a mission, coming up with Counterattack. When I deployed my first platoon as the defender, we laughed and immediately switched to Dust Up instead. The issue was the distance between the two deployment zones, placing us 8" apart at the start of turn one, and that kind of standup short range slugfest was not what we wanted from the game.

With each of us setting up with just a platoon on the table, Chris did everything right: taking up concealed positions and getting off the first shot. He was let down by some awful dice that left two tanks dead on each side - no big problem for the Soviets but catastrophic for the Americans. They passed their Formation Last Stand, and second platoon of Abrams came on from reserve. The same thing occurred: the Americans took up good positions and fired first, but couldn't survive poor dice. 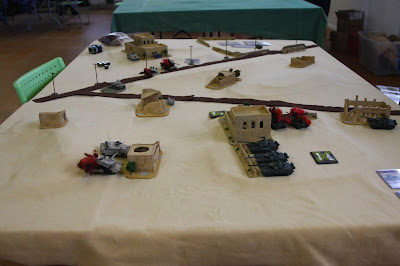 We ignored a failed formation last stand for the Americans and played on in order to get the helicopters onto the table and give them a run. The Cobras tried a few times to shoot down the Hinds with their Miniguns, but fell short on 5+ Firepower tests. With the second T-72 company arriving from reserve, it was only a matter of time before the last two M1A1s succumbed to weight of firepower. 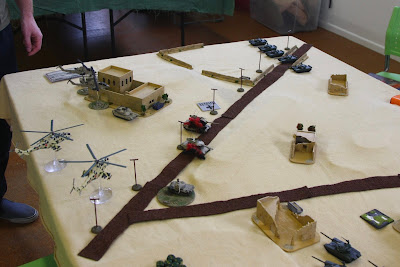 The game was over in less than an hour, so we reset for a No Retreat with the Soviets attacking. Chris swapped one M1A1 for a pair of F16s. With the Americans having just three M1A1s available until their reserves arrived, I pressed forward, set up a gunline with one company along the ridge in the middle, and swung the second company around to the right and towards the front objective. 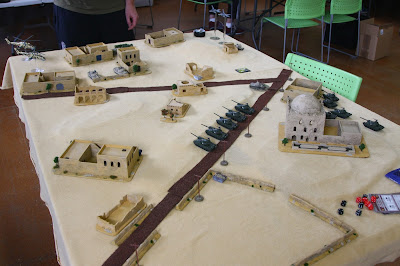 Chris got his Cobras on as reserves, and once again they tangled with the Hinds to no effect. I lost two T-72s from the centre company, but the remaining three plus the Hinds killed one Abrams, putting the platoon into poor spirits. The survivor stuck around, but the Hinds switched target and Spiralled the company commander, leading to an auto-fail of American formation morale on the start of their turn three due to having no units in Good Spirits on the table.

Once again we played on, and the game turned quicker than I believed possible. The survivor from the first M1A1 platoon was able to move into a position to contest the objective, the second M1A1 platoon came on from reserve, and the F16s decided to arrive two turns in a row. By the end of that second turn of air support, all of my tanks had been destroyed. 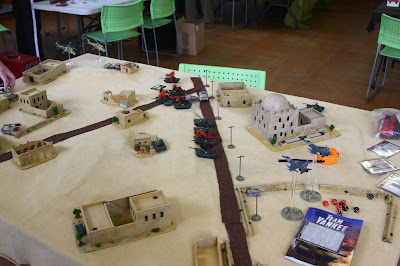 Reflecting on the games, the Americans struggled with the fragility of their two-tank platoons and their vulnerability to a single bad dice roll. The gameplay was fast and brutal, and it looked good. Apart from our issues with the Counterattack mission, there weren't any moments where we thought "this doesn't feel right". However, we believe it would play better with more space for manoeuvre, and to this end, we have agreed that our next game will be 75pts on an 8x6. The arrival of the American jets was a game-changer, and my future Soviet builds will have to include a decent amount of AAA. My plan at the moment is to extend the T-72 companies from five to six tanks each, keep the Hinds and add pairs of Shilkas and Gophers, and a BMP-2 scout platoon. It could feel sparse in a table that big, but that's more a function of the lists we are using, given the number of T-55s or Leopard 1s that could fit into 75pts.

With two games finished before lunch, I grabbed my 8th Army and Afrika Korps armies, and we ran through a game of FOW V4. Sorting through the collection, we came to 77pts each with the British having a formation each of Crusaders and Grants, plus a platoon of Humbers totalling 24 vehicles, facing off against a 14 vehicle mix of Panzer IIs, IIIs, IVs, and SdKfz 222s. Under V3 these forces would have totalled 1515pts and 1365pts respectively. I took the Germans, and we set up for Encounter.

Chris ran the British force exceptionally well. Cribbing an extra 8" headstart for his first Crusader platoon using Spearhead (which I had previously dismissed as all but useless), he hit my five-strong Panzer III platoon with five Grants to the front, coordinated with what seemed like a never-ending stream of Crusaders using their pace to turn into my flank. My positioning was never quite right, and I lost too many shots trying to fix it with failed Blitz Move orders. The Panzer IVs finally came in from reserve on turn five but by then it was too late, and by the end of the next turn I was overrun.

The game played well. It went quickly and produced no weird results. 75pts on a 6x4 felt reasonable - it could maybe do to be slightly fewer points but I certainly wouldn't want to go any higher, given the number of tanks the British can field.

I was left thinking that for this particular match-up the German list needed a platoon of PaK38s, either in the Formation Support slot or as part of a small Afrika Rifle Company. Crusaders are going to struggle to take an objective held by three PaK38s, creating a problem for the British: the Crusaders need to get into the flanks of the Panzers in order to do any damage, but won't be able to without being drawn onto the PaK38s, which they are going to struggle to kill. It's clear that while the rules have been streamlined, and the first release of lists brutally pared back to their most basic core, the mid-war game still poses interesting challenges.

All in all, it was an excellent day of gaming. My next immediate project is finishing my LW British armour for a game with McZermof, hopefully in a month's time.
Posted by Richard at 11:47 pm