And So It Begins

Last week I played 40K for the first time, but it didn't come about how I had expected. I was rushing to paint as much as I could before the club day on Saturday, when my 10 year old daughter Zoe asked if she could paint something as well. This seemed like a good idea, so we headed off to the nearest hobby shop to see what we could find. Her attention was caught by a poster of a Space Marine and a Necron, so we picked up a Recruit Edition starter box and she's been doing a very nice job of painting up both sides while I chip away at my Admech. 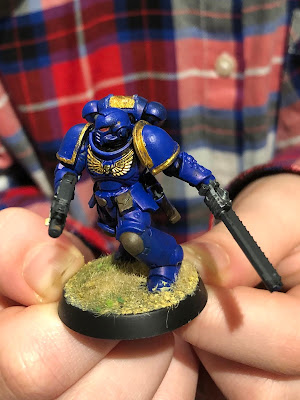 As well as some beautiful push-fit miniatures, the starter box includes a few basic missions to help learn the mechanics, growing in size and complexity until they use all of the miniatures in the box, and it was the first couple of these that were my first play through of the rules. As Zoe works her way through the rest of the box we will move on to the next ones.

Saturday came around, so we headed to the club and played a basic 500pt game against McZermof's Deathwatch. 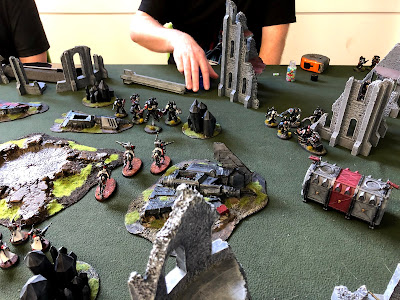 As a learning experience it was great - we got to cover all of the basic rules, I got an idea of some of the shenanigans that are possible, and I was able to Neutron Laser a few Space Marines before I got overrun. There's lot to learn, but looking forward to playing again soon.

Next time: I have impulse bought a copy of 'Seven Days to the River Rhine', so hope to offer a few thoughts on that.
Posted by Richard at 7:34 am

Email ThisBlogThis!Share to TwitterShare to FacebookShare to Pinterest
Labels: 40K